I celebrated the end of 2012 and 2013’s beginning in my beloved Edinburgh with some of my closest friends. While a stack of dishes awaits me, I’m taking a moment to look at what lies ahead.

I’m making another international move and returning to the States. I wasn’t able to find a job that would sponsor me for a visa, so I’ve decided to return to the States when my student visa expires. I don’t know where life is going to take me, but with hope my roads will lead me back to Edinburgh. I’ve had an amazing, painful, life-changing time in the UK, and while I wish I could stay, it’s time for me to return to my native land.

I hope to return to Boston, where I lived as an undergraduate. I haven’t enjoyed all that Boston has to offer, and will get involved with the swing dancing community there.

In March we’ll be releasing the first issue of Far Off Places, the online literary magazine I started with three friends while living in Edinburgh. The beauty of it being online and organised through Google docs means that we can continue to work on the magazine while on separate continents.

I hope to take up blues dancing while living in Boston. I’ve heard that it’s the place to learn traditional blues in the US, and I’ve found that there’s nothing like dancing to keep me in a good mood. Blues complements lindy hop excellently, especially as some of the events I’ve attended have had blues after parties.

I will explore. I want to see more of the US (Seattle, New Orleans and San Francisco). I want to read. I want to learn.

Here’s to 2013, may it be a good year. It will be a difficult year, as I continue to navigate adulthood and try to settle in one location yet again. But it will, undoubtably, be a good’un, filled with friends both that I know and have yet to meet, pratfalls and maybe a few scavenger hunts through Boston.

I’ve lived in the UK for a year now. One year, with only a brief sojourn back to the States. One year.

One year. One year. Living on my own. Responsibilities. Education. Academia. Heartbreak. Making friends. Seeing these friends move away. Interviews. Starting jobs. Design. Worrying. Worrying about if the government will let me stay here, or if I’ll have to return to the States. Will I get to immigrate? Will I have to return to the land of my birth (I don’t call it ‘home’)?

Whilst queuing for Morrissey’s Manchester gig yesterday, I couldn’t help but notice that there was an open McDonald’s on the premises of the Manchester Evening News Arena. A bit strange, given that we were waiting to see Manchester’s most famous vegetarian.

“I’m not a veggie,” I said to my fellow adventurer/Morrissey fan Amy. “But I haven’t eaten meat in over 24 hours in preparation for my pilgrimage.”

Though I flippantly termed our trip to Manchester as a pilgrimage, in a sense, it was. Though Amy had been to Manchester before, it hadn’t been with a Smiths fan. We didn’t have much time in Manchester, arriving yesterday late morning and leaving first thing today. We did, however, have enough time to make a couple of important stops.

First on the list was the Salford Lads Club. The Lads Club is not, as I originally assumed, a strip club. Instead, it is a rec center, like the Boys and Girls Club.

The Salford Lads Club is about a 30 minute walk from the city centre, located in Salford. It’s down this row of little brick houses. Tucked just off of a main road, it’s one of those places you wouldn’t know was there if you weren’t looking for it.

Salford Lads Club has since cleaned up a bit since the famous photograph was taken. Throngs of fans go there each year, to take their photo like The Smiths, Amy and myself included.

Inside the Lads Club, there is a room dedicated to The Smiths. This could potentially be a bit overkill, but working in its favour was the small size of the room. It was a squash court, now a shrine to The Smiths. The entire room is covered with images of The Smiths, of fans standing outside the Club (I’m going to be sending the photograph of Amy and myself), of articles pertaining to the Smiths, paintings of Morrissey, and notes from devoted fans. 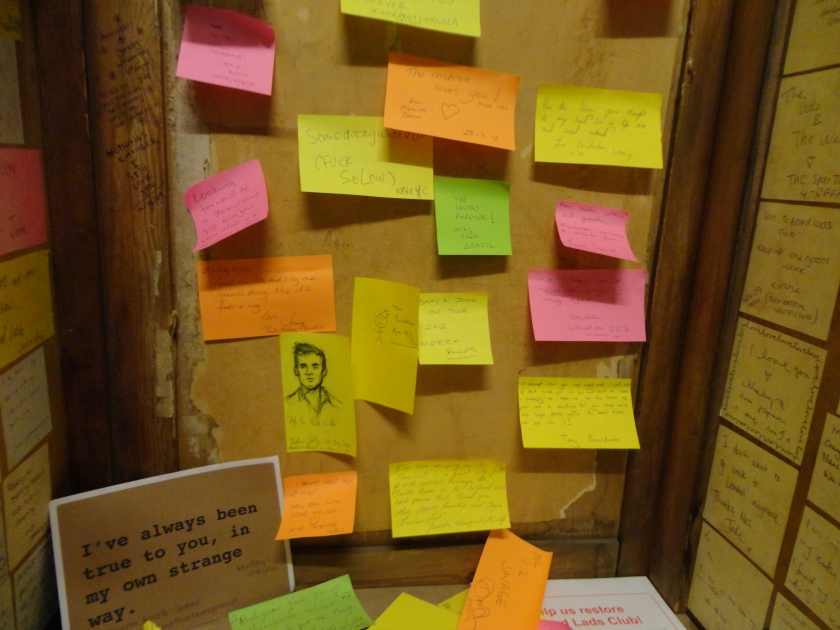 Being of an artsy bent, I left a note of my own–complete with a picture of Morrissey. My note is the yellow one with the drawing in the above picture. By no means my best picture of him, but pretty good for five minutes with a ballpoint pen! I would love to return in a few years and see if the note has been glued to the wall.

After leaving the Salford Lads Club, we wandered to the arena. Amy and I had floor tickets, so we wanted to make sure we were there early.

We weren’t in the first thirty, but were definitely in the first 100 people at the arena. We watched as more and more people piled in, complete with quiffed hair, Smiths or Morrissey shirts, big glasses. I looked rather out of place in my teal top and black cardigan, decidedly unhipster (or, at least, unlike the rest of the fans my age). Whilst waiting, the BBC interviewed a few people. I wasn’t, but I think I ended up in a few shots–I was drawing pictures of Morrissey to pass the time.

Finally, it was time to enter the arena, still a good hour and a half before the show was due to start. The excitement was palpable. I couldn’t help but jump up and down, shaking with enthusiasm.

When Morrissey arrived on stage, there was a great ‘rush and a push’ as what felt like the entire floor lunged to the stage. Everything I said about Balkanarama being the most insane concert situation I’ve been in has been taken back. Morrissey, playing in his home town, wins.

The floor was a hot, sweaty, undulating mass of bodies, of arms, of getting far too close to absolute strangers. Yet it was incredible. Everyone was there for Morrissey, everyone was (mostly) respectful, and it was mad. Though, as a very tiny girl, the second row probably wasn’t the best place for me to be, I’m rather bruised and battered and very thankful to still have some of my painkillers from my back injury!

Morrissey himself was on top form, physically a bit out of shape (the man’s 53 years old, we can cut him some slack), but his voice was just as powerful as when he was in The Smiths. Whilst he doesn’t bound around the stage anymore, his stage presence is dignified and commanding. There’s such passion in his singing.

I’m to see him again tomorrow night in Edinburgh. Am hoping to get front row this time. I do imagine that the crowd may be a bit more subdued than Manchester.

And as a final note…Morrissey biscuits at Salford Lads Club.

I have news. It’s not entirely earth shattering. I’m not being published. I haven’t discovered the cure for the common cold (but movies, plenty of tea and a good book do help).

But…it’s pretty big. For me. You see, I’ve just finished my undergrad degree-I’ve now got a Bachelor of Arts with my name on it. I wasn’t quite sure what I was going to do. Until this morning.

A couple of months ago, I applied for a grad program at the University of Edinburgh. I received my acceptance today. So, starting in September, She Thinks Too Much will once again be international.

I am ecstatic. I’ll be living in Scotland for just shy of a year, doing my postgraduate work. It’ll be quite the experience.

I never thought I’d have to think about graduate school now. At least not for a couple of months. Actually, I figured that I could start this summer after returning from Italy.

I had a meeting about various fellowships and scholarships this evening.

“Is anyone interested in the big scholarships?” asked the professor in charge of the evening.

I raised my hand. I then discovered that I probably should have given this more thought–such as starting freshman year. Prepare for many meetings with various professors and scurrying about writing personal statements.

Ah, the challenges. This is something that I’ve wanted since visiting Oxford University nearly eight years ago—to do my graduate work in the UK. It’ll be long and stressful–the prof warned us we’d probably burst into tears at random moments–but ultimately it’ll be worth it. Even if I don’t get the scholarship, the process will teach me a lot about myself.

Mostly, I haven’t given much consideration to what I want to study. I know that I’m not going to study creative writing or another English-major type  subject. I’m considering science writing/media/communication or public health.

And I need to figure out if I’m a memorable person or not…”Hi! I’m Beth, and I’m writing a WWII novel about RAF pilots!”