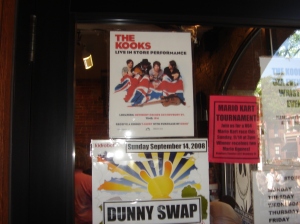 Photo by me. Do not use without my permission.

You’ve wanted to see this band for months. You can’t wait for the concert; you’ve stalked their myspace or official page for months. But—surprise!—they aren’t stopping in Boston.

Local music and comic chain Newbury Comics have a solution. Several times a month, local and international bands perform free shows at one of their stores.

Not impressed with the thought of seeing up and coming bands like The Kooks or The Lonely Island for free? Maybe old stalwarts like Alanis Morissette or Brian Wilson of The Beach Boys are more your speed. Either way, all are acts who have played one of the local Newbury Comics stores.

The shows fill up quickly, so head on down to the Newbury Comics store in question early enough in the day so you can get a neon wristband. The store closes while the gig goes on (for about 45 minutes), and only those with a wristband get in.

At the Newbury Street location, it can be very difficult to see anything, so get there early. Camp out. Hang out all day. You’ll get a better patch of carpet.

The best part? The shows are free, so it may only cost you T fare to listen to Alanis Morissette sing about a jagged little pill.

I’d call that a bargain!